Breaking Down Your Front Door with a Sledgehammer…

The music will move and soothe you with its upbeat grooves and unadulterated in-your-face “electroprose.”

New album out 29 August 2019, Human Killed in Accident, ready to rape your soul 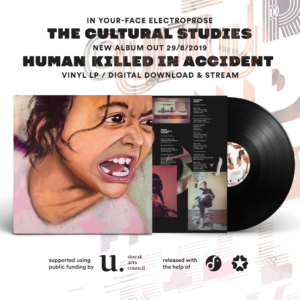 The Myth Behind the Human Killed In Accident (2019)

Electroprose. The musical bile discharge of The Cultural Studies is the brainchild of the Slovakian Oskar Pompa. D&D from Lemuria, bring their ingenious arrangement, mixing, drums, percussion and modular programmation to the table. The Stereo Vampire, a half-Transylvanian Yankee, infects the music with spoken word, ranting and raving like a rabid raccoon. The band slithered from the Brussels underbelly taking shape amidst its undercurrents. Oskar stumbled upon an underground studio, Spector Studio, tucked away in the shadows of the Saint Gilles prison where D&D recorded and mixed the band’s two albums.

Their debut single, “The Automaton”, from their first album Recycled Press, featured on BBC Radio 6 Music on the Tom Robinson Show, on BBC Mixtape and on Chunky’s Choice Cuts. Tom Robinson acclaimed “The Automaton”: “had me at 23 seconds and is my favourite tune of the week by a country mile. If you also love this record as much I do – you may share my curiosity about the band. Curiosity at how something as fully-formed and perfect as this can suddenly arrive on our radar out of nowhere – from completely unknown artists we’ve never heard of before.” Paul Scott-Bates, writing on Louder Than War, called the first album Recycled Press a “punchy and occasionally raw sounding album combined with dancey, electro beats it offers an alternative slant on modern day pop”.

Their New Album, “Human Killed in Accident” (2019) peers into a world linking current issues with deranged thoughts with a cool music vibe. B.A.C.K.L.A.S.H., an Emmett Till-style lynching, police brutality, a gang of state-approved assassins on the beat. Justice is dead, along with God, in this dismal, desolate, rotting, corrosive America. Enter a dark corridor of terror, fell the industrial vibe, gritty at times, disturbing images, psychiatric filicide and the Pharma industry’s products sold to the highest bidder, while others perish in the toxic gas. Puppet Resurrection hits on a world where the press is being targeted as the problem, not the solution. Corrupt racist privileged parasitic swine benefiting from human misery, makeshift movements and half-baked state-run attempts at humanity. Fake news or populism, censorship or reality? Head on collision with Silenced Press, mangling your body and vital organs. Feel the dub-groove in Spiral, let the brass take you by the hand and enter the world of Spiral. The cool vibes continue in Under Pressure’s Silence. Dance until dawn stroking your plastic monkey with Plastic Fashion. Signs of authoritarianism high, you leave only one way… Silence the Press. Put on your white suit, grab a cigar, kick back and enjoy the ride.

The album has been musically co-produced by Oskar Pompa and D&D, recorded and mixed at Spector Studio in the dark underbelly of Brussels. D&D infused the groovy electronic vibes with drums, programming and synth with Elvis creating the Frankenstein-ish catchy melodies. Deadred helped make the physical possible into vinyl.

Human Killed in Accident – Ready to rape your soul liquify your spleen.

Get the Vinyl (available 29 August)

Are you gagging for more? Check out the skull crushing first album Recycled Press